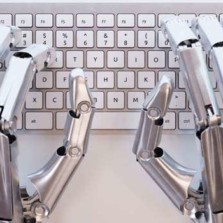 Many of you reading this have already used, and probably prefer, a self-serve checkout line at the grocery or department store. Once we figured out how to use those finicky scanners, and track down a store employee for help, those lines move fast. This is great for those of us who don’t want to go through the pleasantries of a talkative cashier. Then, of course, the shoplifters figured out that stores are smart enough to not simply let you walk out the door without paying for merchandise. Security monitors those lanes more than any other part of the store.
Self-checkout lines are growing in number, and it won’t be too long before the job of cashier is phased out. Although, what this provides is a store than can manage multiple lines with one cashier to monitor, and plenty of people to keep inventory stocked and clean. It’s a win-win.

Manufacturing is a huge part of our economy with nearly 20 million Americans working in the industry. And don’t think for a moment, machine operators are ignorant of the fact that robots will one day replace them.
Robotics technology thrives in manufacturing. The process is faster, more precise, and machines have the ability to run overwhelmingly more hours than a human can. The numbers don’t lie. Robots can out produce humans every time. That doesn’t mean machine operators will no longer be needed. They will just be needed in a different capacity.

Nearly every factory in America has a robot of some kind, and facilities such as Lego’s Distribution Center is entirely run by robots, for the picking, inventory and shipping of products. In the next couple of decades, as a newer, tech-savvy generation steps into these roles you will find that a machine operator takes on roles more similar to a computer programmer or robotics engineer.