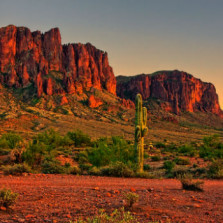 Mississippi has a 5% income tax that starts fairly early– after income exceeds $10,000/year. They also impose sales tax on groceries, which most states do not. The sales tax is 7% which is the highest sales tax in the nation, second to California. However, there are many benefits to be had here, which is why this state makes the list. There are several unique products that are tax exempt, including newspapers, residential utilities, and most importantly, motor fuel. Mississippi also has the 17th lowest property tax in the nation, right after Arizona. The vehicle taxes are two percentage points under the general rate, at 5%. These benefits could easily outweigh the other tax rates which are just about average.

With some of the lowest gas taxes in the nation, this would be the ideal place to move if you plan on driving around often. The state sales tax is only 6% which is also startling low. The sales tax for vehicles is a slim 5%. However, there is a yearly levy placed on each vehicle you own, determined by the value of the car. Another downside to living in South Carolina might be the income tax. After a SC citizen hits $14,400 in annual income, the tax rate increases to 7%– where some other states do not even have an income tax. Buying a summer home here might be the best of both worlds, where you enjoy inexpensive gas and property taxes without paying the income or vehicle owner expenses.

Nevada has much more to offer than casinos and shows, especially in the ways of tax cuts. It is one of the 9 states in America that do not impose a state income tax, which is huge contributor to tax pay in most areas. Additionally, there are no taxes imposed on either food or prescriptions, which greatly reduces the general cost of living in this Southwestern state. One of the downsides of this seemingly sweet deal is that the tax on gas is 34 cents per gallon, which is slightly over the national average of 30 cents per gallon. There is also a vehicle owner’s tax, based on age and value. Depending on what you’re looking for in tax breaks, Nevada could definitely be the state for you.