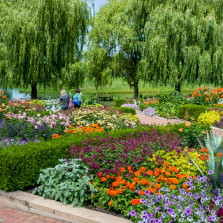 The first thing that comes to mind when thinking of Illinois is usually Chicago. Most people forget that beyond Chicago there are other cities waiting to be discovered. On the list of the 10 wealthiest neighborhoods in Illinois, according to the US Census Bureau, Chicago is not listed. These top ten cities on the list have so much to offer from hiking in Winnetka to tanning on the beach in Highland Park. Learn how the other half lives with this list of the 10 wealthiest neighborhoods in Illinois.

First on the list is Highland Park. Residents in Highland Park have enjoyed the recognition that movies like Ferris Bueller’s Day Off, Sixteen Candles, and Home Alone have brought to the town. Many of its residents have gone off to Hollywood to produce well known movies such as Revenge of the Nerds.

Highland Park has a population close to 30,000 people and a per capita income of $68,888. This area calls to people from all over for its beautiful location and exciting attractions. People rave about its beautiful beaches on Lake Michigan. These beaches utilize nearly 10% of Lake Michigan’s shoreline, providing a lot of space to relax and play. Also, nature programs and recreational sports can be found on these beaches. The Park District of Highland Park oversees the beaches and recreational centers to ensure that residents and visitors of all ages will be entertained.