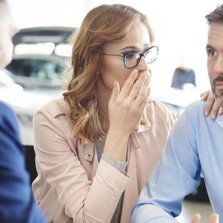 Car dealerships can be intimidating places. Salespeople need you to buy a car so they can earn their livelihood. Because car salesmen need you to buy from them, they may use slightly underhanded tactics to get you to sign on the dotted line. These tactics could include anything from psychological profiling to simply providing you with deals that seem almost too good to be true. Salesmen have many tried-and-true tricks that they use to get people to buy cars from them. Some of these tricks will be easy for you to spot, while others are a bit subtler. Here are eleven tips to gain the upper hand and get a good deal on a car when you’re at a car dealership.

Back in the days before smartphones, buyers had to rely on what salespeople told them. They had to believe salespeople were telling them the right price for a car. Buyers also had to believe it when salespeople said that there wasn’t a dealership where they could get a better price. Now, though, you can easily shop around on your smartphone. You can also use your smartphone to access websites like Edmunds.com, where you can look up the True Market Value of the car. After a salesperson tells you their price for a car, look it up online and see what other dealerships are charging. Then, you’ll be able to use this information as a bargaining chip if you decide to buy the car. Your smartphone is an important tool that can help you save a whole lot of money on your car.

2) Threaten to Walk Away from a Bad Deal

If you don’t like the deal your car salesperson is giving you, there’s a simple bargaining tool that almost always works: threaten to walk away. If you simply stand up and say, “I think we’re done here,” you immediately gain the upper-hand. You don’t want to threaten to walk away too early, though. Spend time negotiating, and try to get the price down to a number that works for you. If the salesperson won’t budge and they’re offering a price that’s too high, then it’s time to make your move. Saying you’re going to walk away is a powerful tool, and you don’t want to play your hand too early. If you wait until the right moment, you’ll have a good chance of getting what you want from the salesperson.

3) Look out for the Porcupine Close

There are a few different classic moves that car salespeople use when they’re trying to close a deal. One of these moves is known as the ‘porcupine close.’ When a salesperson uses this strategy, they’ll ‘stick’ the buyer with a question. This question will always include the word ‘today.’ The salesperson could ask you, “What can I do to make you buy this car today?” Or, they could say something like that, “If I get you this car in black, will you buy it today?” The goal is to get you to buy a car immediately. If you notice the salesperson using this strategy, say something like, “I don’t think I want to make this decision today. I’m going to go home and think it over.” Saying this will give you time to thoroughly research all your options.

4) Don’t Let Salespeople use Time as a Tool

One of the most powerful tools that salespeople have is time. Many salespeople will spend a long time walking with you around the lot and showing you various deals. Their goal is to wear you out so you’re desperate to get out of there. Then, they hope that you’ll agree to a bad deal. One of the best ways to stop salespeople from using this tactic is to be firm when you get to the lot. Say something like, “I’m just here for a short test drive today. Tomorrow, I’ll come back to discuss numbers.” If the salesperson tries to get you to stay longer, say something like, “I have an appointment to get to.” This will help you stay in control. It will also prevent you from getting tired and agreeing to a deal that you don’t really want.

5) Refuse to use the Four-Square Worksheet

The four-square worksheet is an old trick used by salespeople to confuse buyers and make them think that they’re getting a better deal than they’re actually getting. The worksheet includes four boxes: the purchase price, down payment, your trade value, and the monthly payment. The salesperson will start by filling in the boxes with insultingly low numbers. This is done on purpose—the salesperson will then look good when they get you a better deal. The deal won’t really be as good as the salesperson says it is, though. Plus, there will be so many numbers inside the boxes you’ll easily get confused and agree to something you don’t really understand. If you see the salesperson pulling out a four-square worksheet, simply tell them that you know what the worksheet is, and you don’t want to use it. This will show the salesperson that you’re aware of their tricks.

6) Watch Out for the Speaker Phone Trick

Cars salespeople have a trick up their sleeve that’s simple in execution, but still provides them with a lot of information they can use. They’ll sometimes use this trick when you’re car shopping with someone else, like your spouse or a friend. The trick goes like this: when you’re in the salesperson’s office, their colleague will call them on their office phone. They’ll answer and then tell you, “I’m going to take this outside.” When they leave their office, the salesperson will keep the speaker on so they can listen into any conversation that you have. They’ll be able to hear if you’re planning on taking the deal, or what price you’re planning on offering. If your salesperson does this to you, text the person you’re with instead of talking aloud. This will help you keep your cards close to your chest when it comes time to negotiate.

9) Salespeople May use the Impeding Event Close on You

The “Impeding Event” close is another tactic often used by salespeople when they sense that you’re close to making a decision on a car. If you start to hesitate, the salesperson will quickly say that if you don’t buy the car right now, you won’t be able to get it again. This could be because a deal is ending, or they may say that the car is going to sell out. Some of these events may be real, while others could be an exaggeration. If a car salesperson tries to use this tactic on you, logically explain why you think what they’re saying isn’t true. You could say that you don’t believe that they’re going to run out of cars. Or, you could say that you’re sure another dealership will sell the same car to you. By doing this, you’ll show the salesperson that you’re onto their game.

10) Look out for the Alternate Choice Close

One of the most popular sales tactics is the “alternate choice” close. During this close, the salesperson will offer you two choices. They might ask if you want the blue or black model of your chosen car. Or, they could ask if you want a Sedan or a Coupe. The most important thing is they’ll always ask you to make a choice between two options. They’ll never ask you a ‘yes’ or ‘no’ question because they don’t want to give you the option to say ‘no.’ This is a classic sales tactic, and salespeople know that it always works well. The best way to get your salesperson to stop trying this tactic is to simply tell them that you want to see everything available. Don’t let the salesperson force you to make a choice before you’re ready to decide.