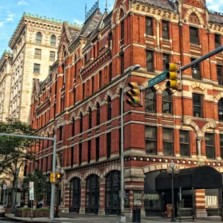 Buffalo is a city of over 258,000 residents in Western New York. It is much more affordable than NYC and many other cities, with a cost of living 20% lower than the national average. The median house or condo value is $75,800, while the median household income is over $32,000. Retail trade and manufacturing are among the most important industries in this city, and the most common occupation is working in sales. Buffalo is a fantastic living option for people who want to experience urban life as well as be relatively close to some natural attractions. In the city, you can go see shows, attend holiday festivals and parades, visit a huge variety of restaurants, enjoy an active nightlife, and more. For days when you want to get away from the bustle, it is only a short commute to Niagara Falls.

Syracuse is a relatively large city in upstate New York with a population of over 144,000 residents. The city is a cheap place to live, with a cost of living index of 90 compared to the national standard of 100. The median house or condo value is $93,100, and the median household income is just under $36,500. Retail trade and educational services make up a large portion of Syracuse industry, and common jobs include sales careers and office and administrative support positions. Syracuse is an attractive city to live in because there are so many things to do there. You can browse dozens of museums and galleries, visit the zoo, see a show, attend cultural and musical festivals, and more. There are also many natural parks where you can see the natural beauty of the area. Furthermore, Syracuse is home to many colleges and universities, and there are many different resources available to city residents.

Jamestown is a city with a population just under 30,500 residents in Chautauqua County. It is a very affordable option for people who are interested in the Western New York area. Its cost of living index is a cheap 78 compared to a national average standard of 100. The median house or condo value in Jamestown is slightly under $65,000 and the median household income is just over $32,000. Over a quarter of industry here is in manufacturing, and 19% of residents work in production services. Jamestown is a great site for experiencing the beauty of nature particularly. The Audubon Community Nature Center is a wildlife sanctuary where you can go on hikes when you want to spend time outdoors. The city is also home to a museum honoring Lucille Ball and Desi Arnaz for fans of “I Love Lucy.” Other Jamestown attractions include art exhibits and artisanal food and beverage tours.