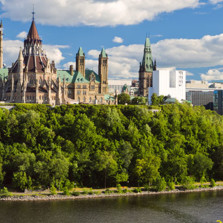 As the nation’s capital, Ottawa is one of the biggest cities in Canada with a population of almost one million. Ottawa is well-suited for those who enjoy the excitement of living in a busy city. As a hub for sporting events, art and culture, and theater, the city’s diversity keeps things interesting. A large percentage of people depend on the extremely efficient public transit system to get around the city’s many amenities. Ottawa boasts a booming economy, low taxes, and affordable homes as well as emphasis on healthcare. Furthermore, a significant percentage of residents are employed in the health care sector. Accessing health care will never be a problem here. Just because it’s a big city doesn’t mean nature gets tossed to the wayside. Ottawa claims 125-miles of the historic Rideau Canal, creating the perfect place for a waterside stroll, or a boat ride.

Located on Lake Simcoe and Lake Couchiching, Orillia boasts miles of public beaches and waterfront parks. The thriving downtown area is always changing with additions like the recently constructed public library and state-of-the-art recreation complex. Orillia retains its small-town charm with its famous opera house and local museums. One of the best regional hospitals in the province calls Orillia home. The Orillia Soldiers’ Memorial Hospital is the second largest employer in the city. The hospital has reached prestigious heights with a growth of 50% after its recent $83-million expansion and redevelopment. Orillia is also a well-connected city. Its convenient central location and public transit system allows access to major hubs in both Canada and the U.S. Toronto is just 93 miles south with buses scheduled 5 times a day. The U.S. border is also within reach at only 140 miles out of town.