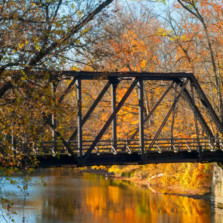 9) The Village of Indian Hill, Ohio

The Village of Indian Hill is located in Hamilton County and has a median per capita income of $96,872. The Cincinnati suburb has a total population of 5,785 citizens and 2,066 established households. The Village of Indian Hill has been recognized as one of the highest quality places for starting a family and is ranked as the second wealthiest community in all of Ohio. The city once thrived on livestock and agriculture and has been influenced by the farming industry into modern times. Some of the most iconic figures to emerge from the Village of Indian Hill include astronaut Neil Armstrong, rock musician Peter Frampton, and Miami Marlins pitcher Mat Latos. The community has an excellent school system, which has earned several awards throughout the years such as the 2007 No Child Left Behind Blue Ribbon.

Hunting Valley is the top wealthiest community in Ohio and is located in both Cuyahoga and Geauga County. With a total population of 735 citizens, Hunting Valley easily takes the crown for the wealthiest community with a median per capita income of $144,281. The small community enhances the ability for the village to maintain this ranking, especially with just 277 households throughout the area. Though there is little variation in terms of racial diversity, Hunting Valley is well known for being a quiet and family-oriented society with approximately 77.8% of residencies holding married couples and 27.8% with children living at home. Hunting Valley is located just outside of Cleveland and possesses a college prep school, which helps to produce highly edu-cated children who are more likely to earn an above average income and carry on the reputation of the village.