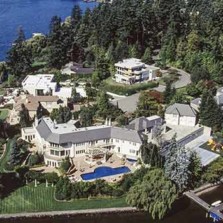 Some people prefer larger suburbs over small towns, and Washington is home to wealthy neighborhoods of both types. Mercer Island has a sizable population of over 24,000, according to Niche. The per capita income is a nice $75,644. As such, you will have a consistent measure of financial comfort if you settle here. Mercer Island residents tend to largely vote Democrat rather than Republican, according to City-Data. This source also reports that most residents of King County consider themselves to not practice a religion. Therefore, this may not be the ideal home for highly conservative and religious folks. The largest age demographic is 65 and older, though, according to Niche, all age ranges are represented here. Niche also reports that the gender ratio is 51:49 female to male, and over 40% of residents have a bachelor’s degree.

Woodway is a small community for people who want to have privacy and tranquility, while still being within a short distance to Seattle. With under 1,400 residents, according to Niche, Woodway is a safe and quiet place to live. The median home value is over $1,000,000, according to City-Data. Considering the average $71,087 per capita income, that price is fairly reasonable. This neighborhood prides itself on walkability and being safe for bicyclists. Additionally, Woodway upholds a Tree Preservation Ordinance, which fits well with the town’s moniker. It is very much a residential community; commercial activity is only allowed if it does not disrupt that dynamic. There are also several parks for residents to enjoy. They include the Reserve, which has nature trails, and the John Bush Play Area, which has play equipment for children.

Tanner is another small suburb in King County that has plenty of appeal. This town has a population of just over 1,000 residents, according to Livability. More than 70% of those residents are adults, and the median age is 43. It makes sense that many residents would be of working age, and the per capita income is $58,783. But even though income isn’t among the highest in the state, the cost of living is not too harsh. The index ranks living here as less than 1% over the national standard, according to City-Data. The same source also reports that education inequality is less here than in Washington overall. This makes sense, since the population in Tanner is well-educated. The town also has a lower unemployment rate than the state average, which may also have ties to availability of education.