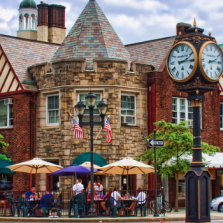 Matinecock is another Nassau County neighborhood located in Oyster Bay on New York’s Long Island and has a residential median income of $93,559 per year. Moderately populated in comparison to other area neighborhoods, Matinecock hosts approximate 810 residents according to the 2010 United States census. It is considered to be one of the top five wealthiest areas in the United States of America, and was once the wealthiest in all of New York’s state borders. The majority of Matinecock’s age range is between 25 and 64 years old, which accounts for approximately 53 percent of the entire neighborhood population while over 26 percent are minors under the age of 18. An average home in Matinecock can be purchased for just over $1.3 million while larger homes start at roughly $5.2 million.

Oyster Bay Cove is another neighborhood found in the village of Oyster Bay in Nassau County within Long Island, New York. Residents make a median income $103,203 per year, and the moderate population is approximately 2,200 people according to the 2010 census. There are at least 725 homes in Oyster Bay Cove, and approximately 633 of those homes are inhabited by families. The poverty line in Oyster Bay Cove is very low, and the neighborhood’s proximity to downtown New York City allows for much financial opportunity and growth. Oyster Bay, as a whole, is a family-oriented village and claims iconic movie settings including the home of Jack and Dina, played by Robert DeNiro and Blythe Danner, in the comedy directed by Jay Roach known as Meet the Parents. Other popular television and movie homes in Oyster Bay include that of Phil Leotardo’s hideout and demise in The Sopranos.

Scarsdale is a New York town and neighborhood located in Westchester County right outside of Manhattan. Residents earn a median income of $89,907 per year, and there are approximately 17,166 inhabitants in all of Scarsdale, as implied by the 2010 United States census. Early influences on Scarsdale come from colonialism and the American Revolutionary War. Scarsdale also played a major role in feminism and women’s suffrage with historic establishments including the 1918 Scarsdale Women’s Club and the 1921 Scarsdale League of Women Voters. Scarsdale is connected to Manhattan, just 25 miles away, via the Metro-North Railroad. Easy downtown access allows for a busy commute for professionals and a suburban home getaway from bustling business within the city. Just over half the Scarsdale population has children under the age of 18 living at home, implying that it is a very family-oriented environment with a touch more cultural vitality and quality education.

Hewlett Bay Park is a Nassau County neighborhood with a median income of $113,320 per year. Located in Hempstead on the shores of Long Island, Hewlett Bay Park is the wealthiest neighborhood in New York and has a population of nearly 500 residents. It is also recognized as one of the top twenty wealthiest neighborhoods in all of the United States. The area includes a private Jewish high school for girls as well as a secular high school known as George W. Hewlett High School. The village boasts large multi-bedroom homes, lush green lawns, and Mediterranean style architecture. Homes easily range from $1.9 million to nearly $6 million while land is set at $250,000 per square acre lot. Residents of the area can enjoy nearby nature preserves such as the Hempstead Lake State Park, the Valley Stream State Park, and the Jones Beach State Park.