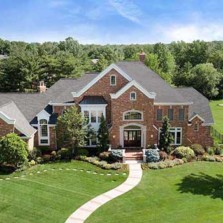 As the second biggest place on our list with a population of nearly 11,000, Town and Country was originally founded as a village in 1950. It’s now morphed into a bona fide city with one of the highest median incomes of Missourian cities over 10,000, as well as one of the wealthiest cities in the U.S. The median household income is around $140,000. What used to be farmland has developed over the years. However, this is a peaceful residential area with plenty of green landscape for those who prefer a laid-back country setting. This city’s biggest claim to fame is Bellerive Country Club. The golf course has hosted the 1965 U.S. Open, the 1992 PGA Championship, and the 2018 PGA Championship. Town and Country had several prominent private schools within its boundaries as well as Maryville University, which offers over 90 degrees at the Bachelor, Master, and Doctoral levels.

Rated one of the best St. Louis suburbs in which to live, Frontenac is nestled between Westwood and Ladue. This neighborhood claims roughly 3,500 residents and is just 15 minutes from St. Louis. The median household income is around $150,000. The neighborhood’s style was inspired by the historic Chateaux Frontenac hotel in Quebec City. French architecture is strongly encouraged in real estate design here. Most homes were built on 1-acre lots of land, ensuring that residents have plenty of space and privacy. One of the biggest perks of living in Frontenac is having direct access to Plaza Frontenac, an upscale shopping mall which includes stores like Saks Fifth Avenue, Tiffany & Co., and Neiman Marcus. Roughly 35% of the households include children under 18 and parents have a choice of sending their kids to schools in the neighboring Kirkwood and Ladue School Districts.

A city of roughly 2,600 people, Clarkson Valley is the farthest city from St. Louis at 30 miles away. This affluent neighborhood is a great choice for families raising children. 40% of households have offspring under 18 living at home. The median household income is around $154,000. Rockwood School District has a selection of excellent public schools serving the city, in addition to several local schools in Clarkson Valley. This area is a good pick for those who crave natural scenery. Clarkson Valley boasts a peaceful location amongst tall trees, rolling hills, and valleys with all residential property resting on a minimum of 1-acre of a land. There is a medical office within the city, as well as a country club. The basic philosophy of this city (as declared by the Mayor) is “less government is good government” with a focus on personal safety, property values, and the environment.

Located about 15 miles west of St. Louis, Crystal Lake Park is listed as a Class 4 city, with a small population of under 500 people. It’s almost completely surrounded by the cities and neighborhoods of Huntleigh, Town and Country, Country Life Acres, Westwood, and Frontenac. The median household income is around $80,000. This is one of the more affordable locations to purchase property when compared to other locations on this list. The average home price hovers under $400,000. Management, business, finance, and health practitioners are the main fields of employment for residents in Crystal Lake Park. Most commuting times is less than 20 minutes to work. Hunter Park is the central point of the neighborhood and was recently commissioned in 2015. It currently has a playground and the neighborhood plans to continually improve upon the park, eventually adding gardens and electricity to support park events.

This village, with a population of under 900 people, may be small but it holds a several significant sites. The Ulysses S. Grant National Historic Site, also known as White Haven, is located here. It was the childhood home of Grant’s wife and the couple lived in the house off and on during the 1950s. The home is now a museum commemorating the life and career of former-President Grant. A log cabin built by Ulysses, known as Grant’s Farm, is another historical site that Grantwood lays claim to. Prominent people have continued to cultivate this village with August Anheuser-Busch Sr. eventually purchasing the farm. It’s now a tourist attraction with many animals such as buffalos, elephants, kangaroos, and the iconic Budweiser Clydesdale horses. Residents here enjoy a high-quality of life with local restaurants and the 8-mile long paved Grant’s Trail running through town. The median household income is around $92,000.

Holding the largest population of people at roughly 16,000, Clayton is the county seat of St. Louis County sitting on the cusp of the big city itself. This city’s setup is a far cry from the smaller communities on this list. Clayton is known for its business district with multiple skyscrapers and bustling downtown full of galleries, boutiques, and fine restaurants. Clayton houses many wealthy and educated young professionals. The median age here is 29 – roughly 20 years younger than all the above-mentioned locations. The demographics in Clayton are also the most diverse in terms of race and family composition. The median household income is roughly $88,000. Founded in 1877, Clayton is now well developed, housing the headquarters of big-name companies such as Famous Footwear and Enterprise Rent-a-Car. It also claims part of Washington University in addition to its own Fontbonne University.