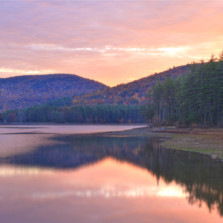 Malverne is a village town in Nassau County, Long Island, with a population of over 8,500 residents. It is a great place to live for people who want the everyday feel of a small town while still being close to a big city. There are many activities offered to residents and a quaint town center, as well as a movie theatre and a preserved farm. As expected on Long Island, median home prices are higher than the state’s overall average, at $439,200. However, median household income is also higher than average, at $114,497. The residents are well educated, with 95% having graduated high school and almost half having at least a Bachelor’s degree. Many residents tend to be of retirement age, although there are other age groups present as well. And since NYC is less than half an hour away, occasional breaks from the closeness of village-style life are within easy reach.

Rye is a town in Westchester County with many amenities and resources for its almost 16,000 residents. The median home value and household income are both higher than average for New York State, and the crime rate is extremely low, at 85% lower than the state’s average. Rye is a great place to raise children, as the high school graduation rate is 18% above NY’s average. Additionally, 74% of residents have at least a Bachelor’s degree. In terms of activity-oriented attractions, there are several parks, shopping and dining areas, libraries, and more. The town is also regarded as an overall friendly community, so if you would like a safe and tight-knit atmosphere, this may be the right place for you.

Woodstock, known mainly for its historic music festival, is a town of just under 2,000 residents in Ulster County. It is a great town in terms of livability due to its low crime rate, good education system, and the many amenities available. Home prices do tend to be higher than the state’s average, with a median of $329,000, but accordingly median household income is also relatively high, at $60,357. The people of Woodstock are well educated, with 97% having graduated high school and 60% having college degrees. As for attractions, the town has many museums, parks, and restaurants, as well as having outdoor musical concerts throughout the summer. Life in Woodstock offers cultural opportunities and an unrushed lifestyle, which can make for having a great time.