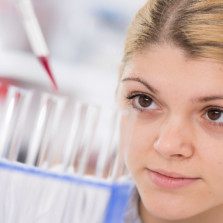 Sales representatives are important in every field, and that includes scientific and technological companies. This job usually includes travelling as you maintain company sales contacts in order to sell products. You can make a large sum of money without much stress, because if you are a social person, you will be able to make your way working the most interaction-heavy aspects of technological distribution. The average salary for this job is $89,170 per year, and the highest salaries are over $150,000 annually. You may also have a fair amount of down time in which you can take care of any projects which could act as potential sources of stress. In order to go into this field of jobs, you will need at least a Bachelor’s degree in a related subject, as you need to have some familiarity with the science behind the company.

As we continue to deepen our scientific understanding of the universe, physics remains an intriguing field of study. Physicists study the fundamental physical features of the world and in some cases, seek to apply those to developing technologies. Many modern physics problems tend to be theoretical, so if you are interested in a math and theory-heavy job with great pay, physics is a possible career for you. Professional physics as a career has a stress tolerance rating of 61.3, and the average salary is $117,040 per year, although some physicists may make closer to $200,000 per year. The majority of physics research positions require a Ph.D., so you will be making a thorough educational investment if you choose to pursue this career. But if you enjoy this kind of problem solving, you will have a good time unravelling the truths of the universe.