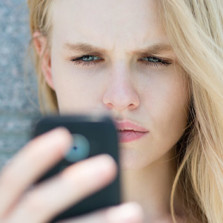 Technology advancement is ever creating better features in our lives. From cars to phones to computer software, it seems every day brings some new version or update of one thing or another. The question is, how much is it really costing us? According to the American Institute of Certified Public Accountants, as reported in U.S. News, the average American spends as much as 17% of their monthly mortgage or rent cost on keeping up with technological advancements. This may not even include all the gadgets and services you use. Add to the costs, the inconvenience of continually having to update or upgrade, and it can cut into your time as well. If you’re someone who feels like it’s all too much, read on to find out exactly how technology can drive you broke (and crazy!)

Nowadays, every company seems to try to get all the business they can from you. When you purchase something, such as software or Internet services, often you get hit with another offer to upgrade or bundle services. The “flypaper” is the “free version” when it comes to computer maintenance software, for example. Internet services will give you a great introductory offer for the first year to bundle your television and phone. Most people don’t pay attention to when that initial offer expires. That’s when you get that large bill, or automatic debit from your bank account, you didn’t expect. Add to that, there are hidden taxes and fees built into the prices of these services. Therefore, your bill is higher than what you signed up for. It’s not always easy, but it’s advisable to read the “fine print” and “user agreements” before purchasing any service or software.

It seems to be a trick of the trade when it comes to confusing consumers about their bill. That’s where they get you. You signed up for a service at an introductory price, and it’s surprisingly higher when the bill arrives. Then, you look at the bill trying to decipher what you’re paying for and more confusion ensues. You can’t make heads or tails out of their billing. Then there’s the old trick of when you try to login to your account and their system is undergoing maintenance, and your account information is not accessible at this time! That’s enough to drive anyone nuts. It’s bad enough you have to pay that unexpected high bill. It’s infuriating when you can’t get into your account to pay it. Add to that, now you’re late and, you guessed it! A late charge has now been added on top of it all!

Here’s another area where we end up paying for something we thought was included, or free! Services that give you a certain amount of data included know full well, you’re going to use it up and need more storage eventually. At first, it sounds great. You think to yourself, I’m never going to need all that storage. Then you discover all the things your new device or software can do, and presto, you’ve used up the data storage included in your initial plan. But, that’s okay. They’ve got you covered! For a small monthly fee, you can increase your storage hassle free! And there you have it, another monthly bill, no matter how small, in the end adds up to more annual costs added to your new and fancy device or service. This is especially true for cellphone data and online file storage services.

The uses and needs for “apps” is ever expanding with the growth of technology. Even if the app is free, it can drain the life out of your phone battery, for example. This is especially true of the advertising aspect of your so-called “free app.” Have you ever used a free app and not seen an ad? Chances are, the answer is no. That’s because the app creator makes more money on the ads you’re seeing, than if they were to charge you for using the app. Then there are paid for apps that include other offers, or surveys, or want you to rate their app before you even tried it, after you sat there waiting for it to install on your device. Now, how annoying is that?! There’s nothing more frustrating than going on an app and having to navigate through all kinds of diversions before you can use it.

You finally get that new car of your dreams. It has all the bells and whistles, including satellite technology. You feel like a big shot driving around talking on your phone through the dashboard. The free trial was included with your purchase. You think, well, I’ll just use the free trial and ditch it when it expires. What you didn’t count on was the fact that now the free trial is over, and you just can’t live without that technology. So, here you go. Another monthly charge for something that started out free! Next thing you know, you have another bill in your monthly arsenal of payments due, and don’t those month’s roll by quickly?! Add to that, you also agreed to the free trial of the satellite radio service. Now you’ve got all your favorite stations programmed, and you don’t want to part with those either, do you?!

So, your outdated computer won’t run your new software. Or, your new computer won’t run your old software that you never upgraded. Either one can be a financial drain. It seems like technology works for itself, not the betterment of humanity. If you didn’t upgrade your Adobe Creative Suite before the next version or two was released, you’re out of luck. You can’t even buy the software anymore. You have to rent it via an online subscription. Same goes for Microsoft Office and most of the major software distributor’s. Constant upgrades seem to have consumers by the proverbial throat. You can’t work if your software or device isn’t functioning. It won’t function unless it’s all up to date and compatible. It’s a lose-lose situation for anyone who likes older versions of programs, or has an older machine that still works well, but has the wrong operating system for today’s programs.

Here’s where you can easily spend unwanted dollars for something you thought was free. Most of the security and privacy software companies have a “free” version. They usually let you use the software at no charge. The catch is, you won’t have all the features you need to safeguard your computer. Yes, they’ll notify you when an update is available. That’s when they’ll show you all the features you’re missing. It’s called “fear of loss” in sales lingo. With the threat of so many damaging virus’s, do you really want to run the risk of getting locked out of your computer by something as harmful as “Ransomware?” You’ll either need to completely reformat your hard-drive or pay ransom to some criminal who is holding you hostage for a considerable fee. It’s cheaper to buy the full version of the software and add yet another bill to your list!