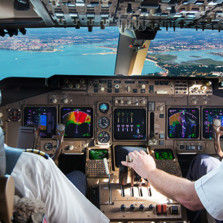 Right up there alongside doctors in terms of high-paying salaries with a chance to retire early are orthodontists. They can open a private dental practice or join an existing team of dentists and earn right out of college. The salaries typically start high and are comparable to what physicians earn. Since dental school is costly, tuition is a challenge, and student loans may exceed $100,000. The earning potential is high, though, and while earning more than $100,000 a year it is possible to repay those loans quickly. Once that major source of debt is out of the way you can begin saving for retirement at a fast clip and retire early.

Another public service sector job that can be hazardous but rewarding is a law enforcement career. Most police officers earn at least $45,000, depending on where they work. Detectives can earn considerably more than that. There are many positions in the law enforcement field that may not necessarily be dangerous but may afford a decent retirement as well. It takes a lot of personnel to run law enforcement agencies and a desk job could just as easily yield a nice retirement pension. Meanwhile you get to retire from most law enforcement jobs after just 20 years. Then you will enjoy pension benefits that are usually about 50% of what you earned on the job.