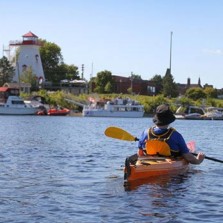 Saguenay is about two and half hours north of Quebec City and the average home price is $173,056. Residents primarily speak French. Aluminum, the boreal forest, genomics and biomedical science are the big industries propping up the economy. Surrounded by nature, it is a haven for outdoor wilderness enthusiasts. Located in the region, Parc national de la Pointe,Taillon has beaches on Lac Saint-Jean, Parc national des Monts-Valin offers panoramic views. Vallée des Fantômes is home to a ghostly forest. Residents and visitors can sail on the lake and fjord, or head to the marine park for an underwater education. Snowmobiling and dog sledding are also popular activities. The city has three boroughs: Chicoutimi, the center, Jonquiere, on the river, and La Baie, set slightly farther away from the urban center.

Saint John is in New Brunswick on the Bay of Fundy. The average home costs $168,221. Residents primarily speak English. The economy was once dependent on ship building and became internationally famous when the fastest ship of its day, the Marco Polo, was built there. These days the economy also relies on research, information technology, and tourism. The oil refinery, Port of Saint John, Moosehead Brewery, pulp and paper plants are also major employers. Saint John has a strong Irish heritage so the culture of the city draws comparisons to Boston and New York. Residents enjoy musical performances, dance programs, theaters, art galleries, and many museums. It is also a popular city for beer brewers. The historic downtown area has benefited from cruise ships that dock locally.