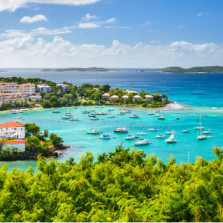 Located in Wohoa Bay, Maine, this quaint island is a dream for anyone looking to build their island home from the ground up. The only manmade feature on the Chandler Island is a gazebo, but the one acre property kisses the Atlantic Ocean and will bring you lobster for days.

For just $39,999 you can purchase your own east coast private island and turn it into your personal paradise. Build a house, open a restaurant, start a fishing company— anything is possible when the land is this affordable.

Fisherman’s Point Island is a two acre private island located in Lake St. Clair-Goosebay, Michigan. Much like tropical island living, residents can enjoy observing local wildlife and stunning landscapes, however Fisherman’s Point Island has a much more northern element with its freshwater ecology and seasonal ice fishing potential. Michigan is considered to be about 50 percent forest, which contributes to the abundance of natural tools and living supplies. For just $175,000 potential home owners can enjoy a newly renovated and secluded cottage with easy boating and fishing access on the world’s largest freshwater delta. It is the perfect option for anyone wishing to escape the hustle and bustle of modern technology and catch their breath.