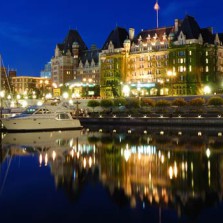 Oakville is a humble southern suburb in Ontario with a close proximity to Toronto. There are approximately 183,000 residents in Oakville, and nearly 12% of inhabitants are over the age of 65 years old. The average home value in Oakville is currently at about $721,000. While real estate is seemingly higher than many other Canadian cities, the local attractions, diverse demographics, community events, and abundance of gourmet food make Oakville a very livable location for new retirees looking for quality homes and stable community values. Favored local activities include the enthusiastic Downtown Oakville Jazz Festival, the Oakville Waterfront Festival, Midnight Madness, the Oakville Family Ribfest, and the For the Love of the Arts Festival. Oakville residents express a great appreciation for live music and performance as well as a passion for golf and the Blue Devils soccer team.

For years, Toronto has been a Canadian city responsible for much of the world’s current musical trends in the alternative, indie rock, and pop genres. Located in Ontario, Toronto is a unique city overflowing with diversity, art, new age thought, and cultural appreciation. Over 5.5 million people reside in the Toronto metro area, and while the cost of living is fairly high, the city offers stunning architecture, top notch entertainment, quality healthcare, and a vast assortment of explorational opportunities. Retirement communities are generously scattered throughout the city and welcome retirees who want to relive their youth and experience life from a different angle. Summers are warm and bright while winters are cold yet still sunny with the occasional snow, and the waterfront positioning on Lake Ontario feeds the hunger for aquatic activities. There are several Toronto suburbs to consider, as well as the Toronto Islands, and each neighborhood or district has its own unique flair.

Cochrane is a fairly small Canadian city located in the Alberta province and has a quaint population of approximately 18,000 residents. The city cherishes the outdoors and features an abundance of nature based activities including hiking, cycling, paragliding, and more. Locals favor the city’s selection of independently owned coffee shops and cafes for quiet afternoon relaxation and mingling. Cochrane has a total area of 11 square miles yet there are at least 18 different residential neighborhoods to explore. Retirees can enjoy historical and artistic enlightenment at famous events and attractions including the Cochrane Ranche Historic Site, the Chamber of Commerce Trade Fair, the Terry Fox Run, the Labour Day Rodeo, the Canada Day Family Concert, and much more. New residents might also appreciate the small municipal government, which consists of six councilors and a mayor who hold regular community meetings.

Rimouski is a French speaking Canadian city located in Quebec that has been influenced greatly by industrialization and marine life. Rimouski has a metro population of over 50,000 residents and hold strong to its historic French influence. Visitors and residents of Rimouski acknowledge the city for its cultural richness and promotion of music and art, particularly when it comes to jazz and international film. Healthcare is easily accessible in Rimouski due to its core economic success in the Regional Hospital of Rimouski, which also happens to be the city’s most prominent employer. Locals can enjoy visits to the Music Conservatory as well as the Institut maritime du Quebec for a dose of ocean education. Rimouski is a well rounded city when it comes to climate and welcomes warm and sunny summertime months as well as frigid and snowy winters characteristic of the northern parts of the continent.