9 Ways Your Cell Phone Can Seriously Harm You!

9 Ways Your Cell Phone Can Seriously Harm You! 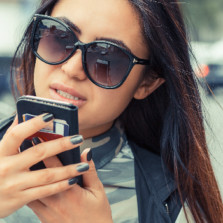 Mobile phones are a huge part of everyday life in our modern world. No matter where you are, you are likely to see people using their cell phones for one thing or another. But there are dangerous and potentially fatal risks associated with cell phones. With that in mind, here are 9 ways your mobile phone can seriously harm you.

Mobile phones generate electromagnetic fields, which may have severe medical consequences. There have been many studies examining the possible relationship between cell phone use and brain cancer, for example, and these studies have had mixed results. Part of the problem in determining exactly how dangerous cell phones are in terms of radiation is due to the fact that health issues may take many years to develop, and such frequent mobile phone use is a relatively recent phenomenon. However, it is known that electromagnetic fields can damage DNA, and such mutations may result in issues such as cancer. Since cell phone use tends to be centralized near the head, this may cause brain cancer, which is a terrible and potentially fatal outcome.