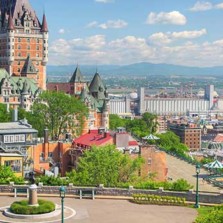 Located on the Ottawa River in Quebec Province, Gatineau is approximately 270 miles southwest of Quebec City. Ottawa lies directly across the river on the southern banks. Gatineau’s population of around 277,000 is mostly French speaking, however 11% of people report English as their native language. The Canadian Museum of History is housed here, along with the popular Casino du Lac-Leamy. There are many parks throughout the city with walking trails, expansive green spaces, and playgrounds. The Gatineau Hills are known for miles of cross-country skiing trails, and beautiful scenery when the leaves change in the fall. Gatineau also hosts many fun festivals – catch the annual Hot Air Balloon festival every September or celebrate winter at Winterlude Snowflake Kingdom. The median family income hovers around $90,000, making it one of the highest income cities in Canada. The average purchasing price for a home is around $250,000.

This city has the charm of a small town with the conveniences of a large city. There is always a way to stay busy in Guelph. Plenty of nature trails, golf courses, and entertainment venues like the River Run Centre compose the city grounds. The Guelph Lake Conservation Area is a popular place for boating and camping. The unemployment and crime rate is among the lowest in the country. Guelph has a very high quality of life and is one of the best places to find full-time employment. Weather here is generally cold winters with mild, humid summers. Median household income is on the higher end of $80,000, however the average home price is around $450,000. Major industries are manufacturing, agriculture-food, and technology. Linamar Corporation employs the most residents in its production of automobile parts. Clearly, this city of 132,000 has a lot going for it.